Mood is one of the first things that’s conveyed by music. Listeners pick up the mood via the partnership of all the various song components, but mostly through:

I purposely placed lyrics at the bottom of that list, even though the lyrics offer the clearest meaning — but not necessarily mood. That’s because depending on the other items in that list, the same lyric can move subtly from sounding introspective, to sounding melancholic. Or from conveying confidence to conveying happiness, which is different.

Let’s say you want your lyric to sound darker, perhaps sad. But as you write your song, you find that it’s not conveying that emotion. Perhaps the lyric sounds angry when you hear it sung, when what you were really looking for was something less edgy, just… sad.

Power up your lyric-writing abilities with “Use Your Words! Developing a Lyrics-First Songwriting Process.” It’s a FREE add-on to “The Essential Secrets of Songwriting 10-eBook Bundle.”

So how do you control the mood of a song? All songs, if they’re successful, are a partnership of elements, and that means that mood comes from the relationship created by all those elements. But let’s take a closer look at the items in the bullet list above, and try to see what can be done to nudge the music toward the mood you’re looking for.

There’s a stereotype in the music world that says minor keys are sad and major keys are happy. There can be some truth to that, but on its own, key choice doesn’t have that kind of power. Songs in a minor key can sound strong (“Stairway to Heaven” – Led Zeppelin), but also happy (“Just Dance” – Lady Gaga), in addition to sad.

So if you think your key choice may be the wrong one, try this: move your song into the opposite mode. If you’ve chosen C major, try chords from C minor (which will likely require you to make adjustments to the melody to fit the new chords). Or move your minor song into major. You’ll know right away if you’re making a choice that will work for you.

One of the best ways to judge what tempo can do is to listen to cover versions of the same tune done by different groups (or the same artist at different times) who have chosen different tempos. A good example is Joni Mitchell’s “Both Sides Now.” It was recorded by many when it was first written in the late 60s, mostly as an uptempo ballad – c. 120 bpm (though Mitchell’s version was slower).

But listen to Mitchell’s own version from 2000, and the mood becomes deeper, more pensive, with little relationship to the original version’s mood. Certainly instrumentation and subtle chord changes are also responsible for the new feel. But tempo is a huge part of the equation.

What you do to a melody has a lot to do with how a song is felt. It’s a difficult aspect of writing to put your finger on, but if you listen to enough songs, you start to get the sense that:

Most song melodies will combine those characteristics as the lyric dictates, to take a close look at what you’re saying, and how you’re saying it.

This is where an experienced producer really is so valuable. How audiences “hear” instruments does change over time, and a producer is probably best placed to know what kind of instrumentation/production will best convey the mood you’re looking for.

Again, compare what Joni Mitchell uses in 1969 to accompany that early version — a simple strumming guitar — compared to the 2000 version above, to get a sense of what instrumentation can do.

You can make the same line of lyric sound happy, sad, angry, pleading… just as we can when we speak. For example, think of how many ways you can say the following line, and make a mental note of how the meaning of the words seems to change each time:

We change the meaning when we change the other components: the tempo, and the contour of the voice, among other ways.

The most important thing to take away from this discussion is the understanding that no song component acts in isolation from other components. The best songwriters have an ability to work all elements together, much like a painter is able to mix colours on a palette to come up with just the right look.

If the mood of your song isn’t what you want it to be, take the time to consider all the options from the bullet list above, and then do some experimenting. As always, your ear will tell you if you’ve solved the problem. 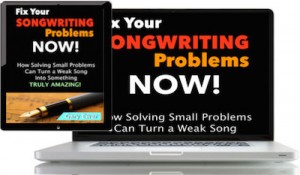 Most songwriters are committing one of the 7 basic errors described in this eBook, “Fix Your Songwriting Problems – NOW!” Get the whole picture on how to polish your songs and clean up your songwriting technique. It’s part of “The Essential Secrets of Songwriting 10-eBook Bundle.”