I write a lot on this blog about song melodies and their so-called climactic high point. That’s a term that refers (usually) to the highest notes of a song. I say usually because sometimes the climactic moment in a song isn’t necessarily it’s highest note. For example, choruses will often sound more climactic — more exciting — than, let’s say, the bridge melody, even though a bridge might feature higher notes. “Single Ladies”, for example, has higher notes in its bridge than the chorus, but the chorus is arguably more climactic.

Where the Idea of a Climactic High Point Comes From

The idea that a song melody often features a moment that we consider to be the most exciting spot is not new, and certainly not exclusive to pop music. Song melodies from the 1700s, and even earlier, when you take a good look at them, show a moment where the highest notes occur, and that high moment serves as a kind of musical focal point: the climactic moment.

It used to be that every melody in a piece of music (and in classical/baroque music, there could be many melodies) would feature this high point. But one high point would act as a “supreme” high point — the one that serves as a focal point for the entire work. Listen to this performance of Bach’s Brandenburg Concerto No. 5 and listen to all the melodies that happen, and you’ll hear this constant creation and re-creation of high points as the movement progresses.

If writing a good hook has eluded you, you need to read “Hooks and Riffs: How They Grab Attention, Make Songs Memorable, and Build Your Fan Base.” It comes with “The Essential Secrets of Songwriting 10 e-Book Bundle.”

Read More About 'HOOKS and RIFFS'

In pop music, the same thing happens — several melodies, all with noticeable high points. But there’s usually one high point that’s more important than the others, and that one typically happens at the start of the chorus.

Why the start of the chorus? Usually because that’s where the songwriter has placed the song’s most important hook. The chorus hook might include the song’s title, taking a prominent place near the beginning of the chorus, and having the song’s highest notes happening there serve to rivet the song into the mind of the listener.

Here are a couple of important examples of this, one from classic country rock (“Galveston” – Jimmy Webb), and the other more recent (“Worry” – Jack Garratt).

“Galveston” is a verse-bridge song where the highest notes actually happen in the bridge, but each verse starts off with a shot of musical adrenaline, with the word “Galveston.” In the final verse, he improvises on the word “Galveston,” drawing even more attention to that word.

In “Worry,” Jack Garratt places the song’s highest notes right at the start of the chorus, with the phrase “don’t you worry about it” happening as the melody descends. That descending line gives an important sense of repose to that line.

Some song melodies aren’t so much about their contour, but function more as a vehicle for getting the lyric across to the listener. In that sense, a melody may not be a song’s most important feature, and so we can find lots of songs where the climactic high point doesn’t really wave any sort of flag of importance.

But if you are writing song melodies where you explore an octave or more in range, you may want to look at each separate melody in the song and see that there is a moment that distinguishes itself as being the musical high point.

And then pay special attention to the chorus, where the most noticeable high point of the song should occur. It doesn’t need to be at the start of the chorus, but should occur somewhere before the end of the chorus, allowing for a few notes to move downward at the end. 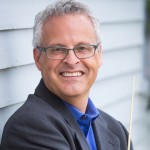 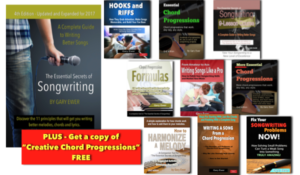 Get the eBooks that thousands of songwriters are using to polish their songwriting technique. “The Essential Secrets of Songwriting 10-eBook Bundle” shows you every aspect of how to take your writing to a new level of excellence.