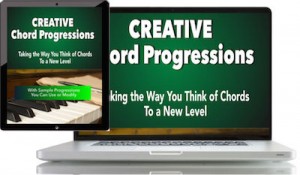 Download “The Essential Secrets of Songwriting” 10 e-book bundle, and build your audience base! Get today’s deal: A FREE copy of “Creative Chord Progressions” when you purchase the bundle.

View It In the Online Store 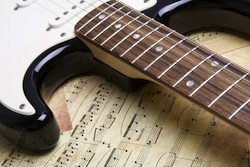 Imaginative chord progressions are wonderful to experiment with, because chords that stray from the basic I-IV-V-I map often result in more creative melodies and a more imaginative approach to song structure. Problems can occur, however, when “imaginative” starts to equate to “random,” or perhaps even “nonsensical.” There is a way to become more creative with chord progressions while still allowing your music to sound structured and purposeful. It means two things: 1) shifting the harmonic goal to a new direction, and 2) using musical logic to make the shift.

A harmonic goal, at least in the pop song genre, means that you’ve appointed one chord as being the tonic chord, the one that serves as a home base. In a simple I-IV-V-I progression, the I-chord is the tonic chord. That means that most of the time, the chords you use will give a sense of musical tension as you move away from the I-chord, with that tension resolving as you move back toward the I-chord.

Musical logic means that every choice you make regarding your choice of chords is a choice that supports the key you were in, and/or can be seen to be in a new key. The spot at which that change happens usually connects with some degree of “smoothness” — a common tone, a common chord, or some other musical device.

When your chords, taken together, point to a harmonic goal, there is an important sense of strength and direction. Your music makes sense, even if the progression is complicated.

Here’s a list of five chord progressions that move through different tonal centres (i.e., they sound like they’re changing key), each change happening with a sense of musical logic.

There’s no one right way to create complex progressions. All that really matters, in pop song genres, is that every chord you choose be seen to be in one key or another. You don’t even need to stay in any one key for very long. Two chords is enough. But simply randomly choosing chords can be detrimental to good song structure. 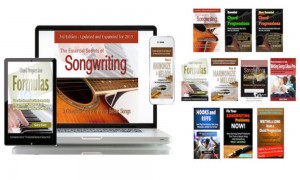 “The Essential Secrets of Songwriting” 10-e-book bundle will show you how to write great songs, harmonize your melodies, and give you hundreds of chord progressions in the process.