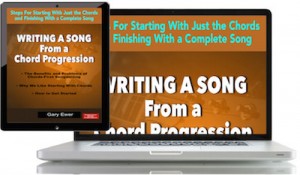 If you like starting songs by working with a chord progression, you need to read “Writing a Song From a Chord Progression.” It will give you the pros and cons of this songwriting method, and help you create songs that really work!

Buy 'Writing a Song From a Chord Progression' ($9.95 USD) or Read More

Do you run out of musical ideas all the time? It’s a common problem in the creative arts. At times, it almost seems like we’ve got a pool of ideas, but that every time we write, we dip into that pool and remove ideas, leaving a smaller pool.

Is there a way to feel creative every day? Where you hope that the pool of ideas you’re drawing from stays full?

If you listen to interviews with the world’s most iconic songwriters — Paul McCartney, Joni Mitchell, Bruce Springsteen, and so on — you’ll notice that they talk a lot about other songwriters. They’re always talking about things they’ve heard other songwriters and bands doing, and how exciting and influential that has been on their own writing style.

And it doesn’t matter if those other songwriters are composing in an entirely different genre. In fact, some of the best replenishing of ideas comes from genres you’d never usually consider.

Daily listening to music, including music from inside and outside of your own genre, is the best way I know to get creative and stay creative. You get to borrow other writers’ ideas, and when you pull those ideas into your own pool of ideas, you get a unique blend of creativity that’s uniquely your own.

If you’re not listening to music every day, and especially music from outside your genre of choice, you’re probably missing out on the one best way to feeling consistently creative — every day! 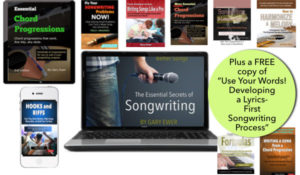 Thousands of songwriters are using “The Essential Secrets of Songwriting” eBook bundle to polish their songwriting technique. Every aspect of how to make a song better is covered. Stop wasting time — take your songwriting technique to a new level TODAY. Ten eBooks, plus a free one: $37 USD (Immediate download)