“From Amateur to Ace: Writing Songs Like a Pro” is one of 10 eBooks in “The Essential Secrets of Songwriting” Deluxe Bundle. Take advantage of today’s DISCOUNT PRICE. Read more.. 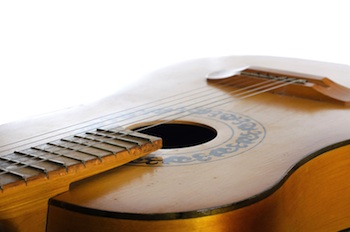 Structurally speaking, an augmented chord consists of stacked major 3rds. So the chord C Aug (C+) uses the notes C-E-G#. It could occur naturally in a minor key song that uses the harmonic minor scale. But it far more likely occurs in major keys, where the added accidental (the G# in the C+ chord) creates an altered chord.

The most common way to use a C+ (augmented) chord is to consider the E to be a leading tone, wanting to move up to the root of an F major chord: C+ –> F. [LISTEN] (Opens in a new window/tab)

In that sense, it’s also possible to consider either of the other two notes of the C+ as leading tones. That’s because all three tones of the chord are the sasme distance from each other. That means that C+ can be followed by a Db major chord, or an A major chord. It might be considered more common, in those cases, to rename the same chord to be either E+ or G#+. All three chords (C+, E+, G#+) will all have the same three notes.

Here are some chord progressions that use C+, E+ and G#+ in various ways: